There was a discussion on gb3kc about why the audio sounds different to that on gb7kr. The latter is narrow band and uses a pair of Kyodo mobile rigs while gb3kc is wideband and uses a mobile repeater unit by the same manufacturer. The audio circuits are basically the same, but the main difference between the repeaters is the non-identical interface units. These contain 600 ohm audio transformers of different makes plus a few other components. Consequently the receive audio on GB3KC has a better LF response than on KR and the transmit audio from GB7KR may have a bit less top. The LF cutoff on KR is actually better for fluttery mobile signals. It’s a shame that in the age of digital signal processing there is still no viable equivalent to the transformer, one of the oldest electronic components known to Man!! 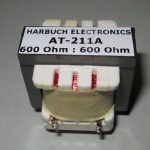