Details of the GB3KA repeater 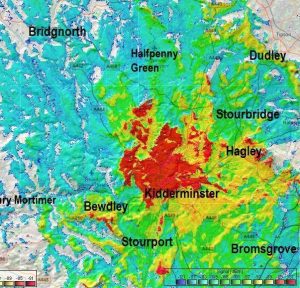 GB3KA is a 70cm analogue voice repeater located near Kidderminster in the West Midlands.
Output frequency is 430.8875 MHz, with the input 7.6 MHz above, on 438.4875 MHz. Modulation and filtering are to “narrow” specifications (2.5 KHz deviation, 12.5 KHz spacing).
Access is by CTCSS-only, tone 118.8 Hz. CTCSS is present on the output, except during beacons.
The map shows the intended coverage for the normal antenna and mast.
This was originally licensed as GB7KR, a multi-mode Digital & Analogue repeater, but running analogue only initially.  The Analogue mode was made a separate repeater, GB3KA, which went into service on 29th December 2019, using the original GB7KR, RU71 channel.

The repeater is semi-permanently linked to GB3KC (Stourbridge), to extend KC’s coverage to the south of Iverley Bank, and to provide coverage for portables in Kidderminster
GB3KA will automatically unlink from ‘KC if an “outgoing” Echolink connection is made using DTMF commands, and will re-link once the connection clears.
To prevent unsolicited connections from interfering with GB3KC’s traffic, GB3KA does NOT allow INCOMING Echolink connections. It is therefore marked BUSY on the Echolink system.  Anyone who attempts an incoming connection is diverted onto GB3KD.

Control logic is currently the same as our other two repeaters, GB3KC and GB3KD, and runs on a DOS machine. Audio processing is done digitally by the control software.
There is a Morse Code “courtesy signal” 3 seconds after the last valid transmission. This will be “K” if the repeater is not connected to anywhere, “C” if it is connected, and an “I” if the transmission came in via the Internet. Other signals are “O” meaning “over-deviated”, “Q” meaning the audio is too quiet and “W” meaning the signal strength is weak.
It is good practice to wait for the courtesy signal before commencing transmission, because this gives the repeater chance to reset for the next “over”, and for other people to break in. You CAN “jump the K”, but if you allow more than 3 minutes to elapse without a courtesy tone, the repeater will “time out” and lock you out.
The repeater’s carrier stays on for 8 seconds after the last valid transmission. It may sometimes give a Morse identification before closing down, if it has been a while since the last one.

The RSGB’s Repeater Management Committee allocated the original GB7KR, to a channel 12.5 kHz below that of GB3KC, due to lack of a suitable channel at the time, knowing that there could be some mutual interference, but as both repeaters were part of KRG, any issues would be ours to solve.
There were some minor interference issues due to GB3KC being licensed and running wide (25kHz) and GB7KR (now GB3KA) licensed and running Narrow (12.5kHz) channels.
GB3KC has now been modified to run narrow deviation on a 12.5kHz channel, which has cleared the interference issue, except for any users who do not have radios that do not have a narrow deviation setting, and in a location that can receive both repeaters.