Details of the GB3KD repeater 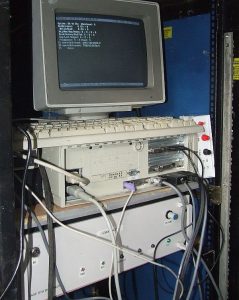 Entering service on 20th May 2004 we believe GB3KD was the UK’s first all-software repeater, with only minimal hardware. Instead of a “hard” logic board, it uses custom software running on a DOS PC for all the logic functions, audio processing, VOIP connectivity and remote management functions.

The software-based approach means we don’t have to keep trekking to site to twiddle pots and change links. The repeater logic and audio processing can be tweaked remotely, and the logic can even adapt to situtations on the fly. The software is constantly evolving, and new versions can be remotely uploaded and installed in a few seconds. The hardware only needs to change if there is a fault or for adding new features such as RSSI and telemetry.

RF equipment normally comprises a pair of Kyodo KM150’s a 6-cavity duplexer, a fairly long run of Heliax and a “white stick” collinear. However the KM150’s have been removed for telemetry modifications, and a temporary Kyodo BSR150 repeater is in use for now. This has very unforgiving filtering, so even a slight amount of overdeviation or frequency error can make the audio sound harsh.

RF coverage is approximately 10 – 15 miles radius of Kidderminster, but as the map shows, the repeater may be worked from some spots much further afield. 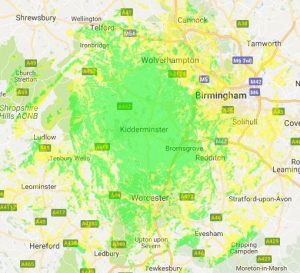 Although repeaters were originally intended for mobiles, and timeouts were much shorter to reflect that, those days are long gone. There are far fewer Amateurs on VHF nowadays, and of those, the proportion of mobiles is even lower.

Therefore we don’t mind fixed stations ragchewing on the repeater, in fact we encourage it, for it gives the few remaining mobiles something to listen to.

All we ask is that fixed stations respect the 3 minute timeout and the gap before the “K”, and give way to mobiles. Bear in mind that a mobile doing 70mph down the A449 might only have around 10 minutes within the repeater’s small footprint.

Access requires CTCSS of 118.8 Hz (tone J). We would like to allow toneburst access, but it provides no protection against the stray signals that pollute the 2-metre band these days. CTCSS is NOT generated on the output frequency, and probably never will be.

GB3KD is permanently available on the Echolink network, with memorable node number 78750 the same as the last 5 digits of the output frequency. It is normally left in unlinked state. Links with other repeaters are created and removed using DTMF commands. Other VOIP options are being explored and tested.

There is a Morse Code “beacon” callsign every 10 minutes when the repeater is idle. This sends the text “GB3KD J”, where “J” refers to the CTCSS tone. When in use, the routine Morse ID “GB3KD” is sent during the first inter-over gap that is more than 10 minutes after the previous ID. In addition, the Morse ID is sent upon some closedowns, but not too frequently.

A short burst of CTCSS (a “kerchunk”) will access the repeater, but it may not always “latch” on. To ensure it latches, you may need to supply some speech, such as your callsign.

Once latched on, the repeater’s carrier will stay on until 10 seconds after the last valid input signal. If no signal is heard within that 10 seconds, the repeater goes back to idle mode.

There are a variety of Morse characters that may be sent as “hand over” signals between “overs”. The conventional one is a “K”, which is sent if the repeater is not linked to any other system. A “C” indicates that it is “connected” to one or more other systems. An “I” indicates that the preceding transmission was received from a linked station via the Internet.

Other signals include “O” if the input signal was substantially over-deviated, “W” if the signal was excessively weak, or “Q” if the average modulation was too quiet. We are in the process of adding “L” and “H” for input signals that are significantly low or high of the input frequency.

It is good practice to wait for the hand-over signal between overs because this gives the logic chance to reset for the next over, and for other people to break in. You CAN “jump the K”, but if you allow more than 3 minutes of overs to elapse without a hand over signal, the repeater will “time out” and lock you out. Echolink stations who repeatedly time out are automatically disconnected and banned.